100% duplication of patterns in series of chords

after I found a way to use Scaler with the fastest times together with the oddest swings to produce amazing Hammond parts, I realized I waste too much time doing a boring editing in Scaler, and now I explain why

Let us start from this workflow of mine for my Hammond

I start with a series of 8 chords, then I add many different variations to each chord,
at the end I duplicate the pattern to create a 2nd verse, a chorus, etc.

My problem is that the Duplicate button duplicates just chords, not the infinite variations I created in the 1st series

In my opinion it’s way easier doing changes in a prepopulated series, to be then able to slightly change them, than rebuilding the variations by scratch at each iteration

And the same applies to Suggest: with it, I can add amazing variations on a pre-existing series of chords, but I have still to rebuild the variations above-mentioned, and it is boring and a waste of time

I hope this option can be added in the future

I mean a button that assigns consecutive groups (Group 1, then 2 etc.) to each series of chord when Global is not the preferred option

I’ve read this several times and I cannot make sense of it at all. Sorry.

The sense is avoiding a lot of useless, repetitive, boring and eye-killing work
That is the typical reason why we use computers, instead of e.g. inkwells and quill pens

What duplicate button are you referring to?

Have you got my last tutorial linked above?

Download the Scaler status, and you’ll see many variations applied on each chord of the 4 lines

but I had to set Groups numbers manually for each line, and I had to rebuild the 2nd, 3rd and 4th line by scratch because the Duplicate button (+ symbol) duplicates just chords, not the various Groups, and not the several different patterns/times/swings I applied to each chord of the father line

There is no duplicate button in Scaler that I am aware of. That’s what puzzles me.

OK, here it is 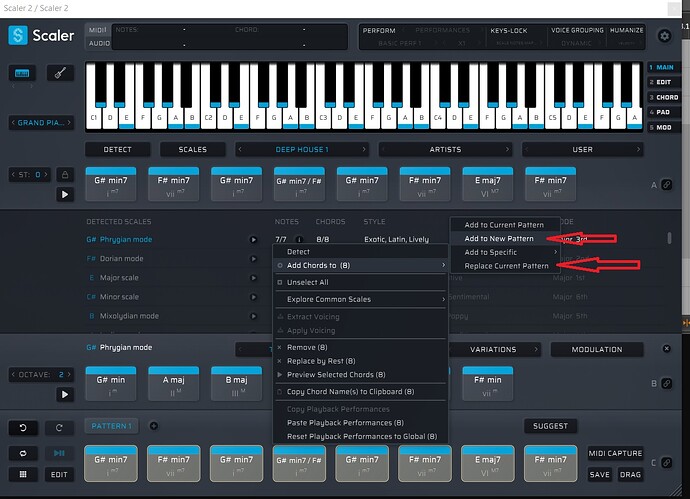 Regardless of the Duplicate button you select (the 2nd arrow is too low, sorry imagine it close to Add to specific pattern), only chords will be dropped in the 2nd octet

All variations you created before (groups, times, patterns, swings, etc.) are lost, and you’ll have to rebuild them

Now multiply this boring process up to the last octet…

Holey Moley! That was totally down the wrong path. No buttons at all. If you would have said Add Chords to menu I would have know.
That’s not the way to do it really.
I lasso all chords and I Option+Click and Drag to a new Pattern. Copies most everything.
There must be an equivalent key short cut on Windows. Press and hold the Ctrl key while you drag and drop according to the internet. 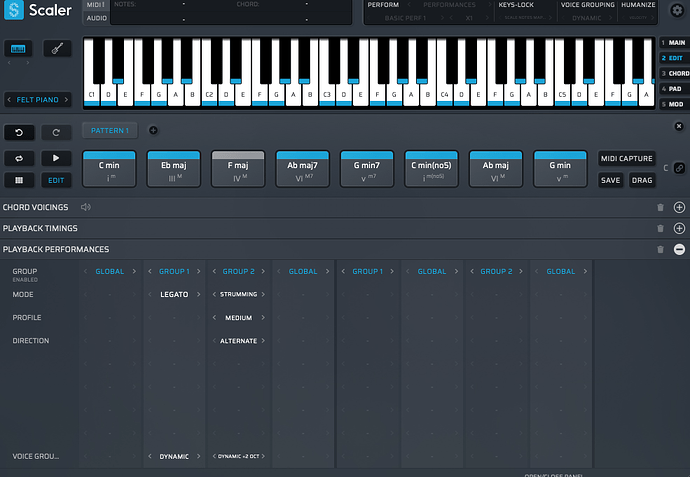 Is that what you are trying to do?

Holey Moley! That was totally down the wrong path. No buttons at all. If you would have said Add Chords to menu I would have know.

and, I never use the proper terminology by purpose, to sharpen your imagination

In this case is different: I would like that clicking a button populates an increasing Group number for each slot of the new octet I am building, and so on for the others
So, in 1st octet the numbers must go from 1 to 8
in the 2nd octet from 9 to 18
etc.

I lasso all chords and I Option+Click and Drag to a new Pattern. Copies most everything.

it works, but only in Edit window

and to duplicate the lassoed pattern I must use ALT, not CTRL 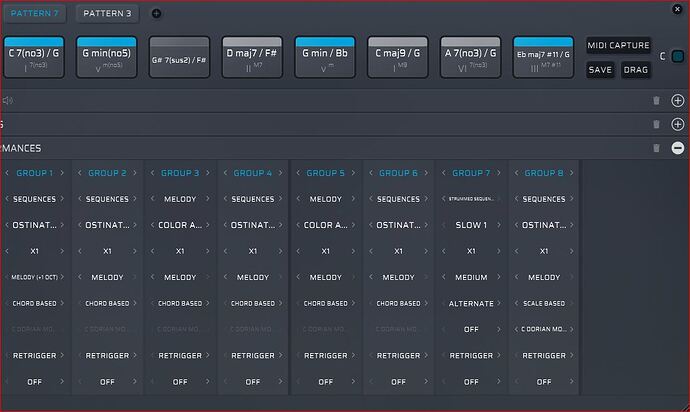 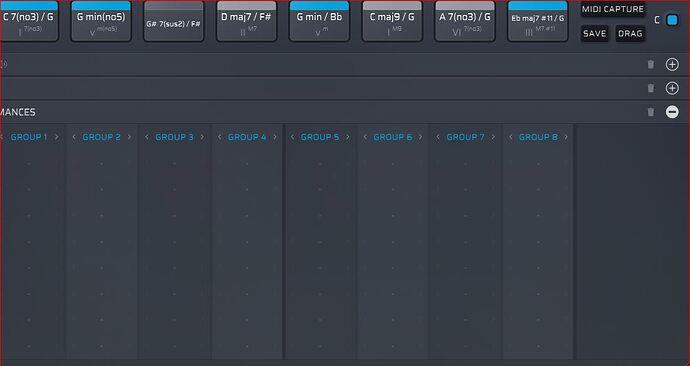 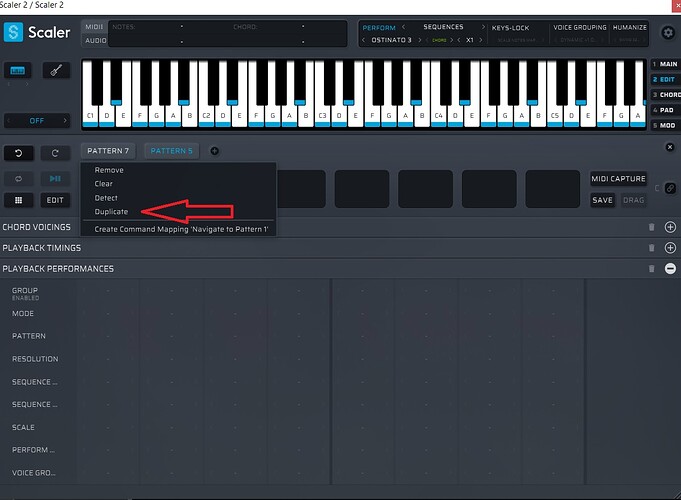 Maybe the option below is what I need, but it is always greyed after lassoing all chords: so it only works on single chords

If only I were able to use the command for all lassoed chords, it could be a solution
but I cannot find a way 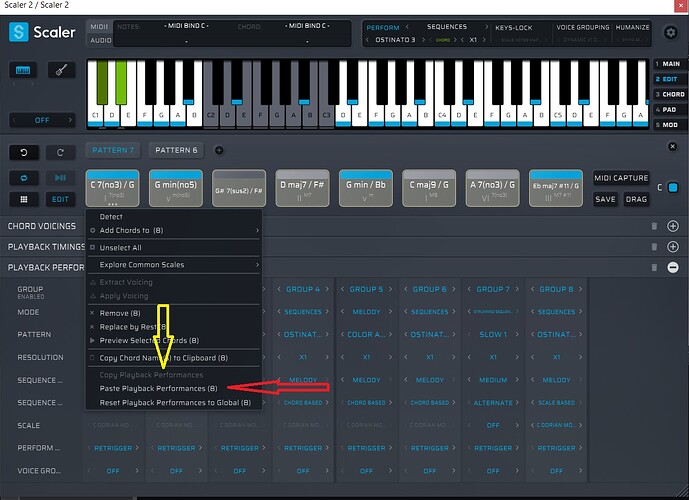 BTW: it doesn’t work with single chords as well

so I cannot understand what it is supposed to work for

I either forgot or didn’t know that you can duplicate a Pattern by the drop down menu.

As far as this goes, that’s just being unhelpful.

and, I never use the proper terminology by purpose, to sharpen your imagination

Joking aside Jamieh no workaround works

so I can only hope those options will be ever added

OK explain the Group thing to me because to me it works as expected.
Say you have Groups 1-8 on the first 8 chords in Pattern 1.
Now you duplicate that.
You have still only created 8 groups but you want to see Groups 9-16? Is that right.
Even if it did call them Groups 9-16 they would still be duplicates of 1-8. It’s very easy to change the group number to 9-16 without changing what they are. Takes a few seconds. Then you would have Groups 1-8 on Pattern 1 and Renamed Groups 9-16 on Pattern 2. Or am I missing something?

yes, it certainly works as expected, but a further option that is automatic Group number population
OR, even better
a 100% duplication of octects with all stuff I dropped into the 1st one (group’s consecutive numbers included) could be very useful to me, now that I found a way to build tons of cool arpeggios/melodies for my Hammond and Moog

Clearly, issuing 2 different queries, instead of one, could have been better, but it happened

Actually, it takes a lot of clicks multiplied by 7
and this, added to the pattern rebuilding, is a long boring time

Ah, in the meanwhile I found the fader option
It is like the Ableton Live one, but in a different place: the Automation Edit Panel
and there is no pencil icon