The D7 and Eb major are ‘greyed’ rather than blue, as they do not seem to fit into the regular chords for Bb Major, are there any knowledgeable peeps here can tell me if I should be picking another scale, ie is there a scale that will actually contain al those chords?

The problem I’m having is if I try and use scaler to play melodies or phrases, when it’s on the ‘grey’ sections, it is playing notes found in bb major scale and not the notes within the chords.

I’ve tried altering every setting I can see in main’ menu with no success,

So a great help would be either advising on a different scale, or letting me know where I am going wrong with settings for melodies and phrases.

This is the actual song so far: Stream Where You There Basic Wip by MuddledMuppet | Listen online for free on SoundCloud

There is no problem to use grey chords…
I use them also, if I like them
Hit them and you should listen the sound
or your issue is different?

That was quite a long post I deleted because it didn’t format properly. I’ll try again later. If I get the time.

Ok I’ll have another crack at it. If it don’t work this time sorry you’re on your own.

The 1, 4, and 5 chords are always major chords. The 2, 3, and 6 chords are always
minor chords. The 7 chord is always a diminished chord but we’ll leave that aside
for the moment. The Roman numerals I’ve used above the chords are a sort of shorthand.
If the numerals are capitals then that chord is major, if lower case the chord is minor.
You can apply this to any major scale no matter what the tonic note is.
Your chord progression Bb-D7-Ebmin-Ebmaj-Fmaj contains 2 chords that use notes
from outside the Bb major scale the D7 and the Ebmin and would be written in Roman
as III(7)-iv. The whole chord progression would be I-III7-iv-IV-V.

F# and Gb are the same note so you reallyhave only one note from
outside the Bb major scale.
That’s why those chords are grey as opposed to blue.
Go ahead and use the grey chords if they sound good.
The theory does matter, but in the end your ears are the best guide.

Just to clarify chords with a blue bar are scale chords, whilst those with a grey bar may be extensions of or alternative chords to scale chords, usually sharing two notes with the scale chord: e.g. if the scale chord is F maj then F7 will have a grey bars as will F min. A dark grey bar is a chord that is further away from the scale chord but may still fit the harmony, possibly introducing some tension as part of a modulation.

The problem I’m having is if I try and use scaler to play melodies or phrases, when it’s on the ‘grey’ sections, it is playing notes found in bb major scale and not the notes within the chords.

There is theoretical reason why a melody cannot have notes that are not included within the harmony: it all depends upon the composer. For example a C maj chord in the harmony may have A in the melody. This makes a C6 chord; a C5 harmony (C G) may have a D in the melody giving a C sus2 chord. Another example is F maj #9 (F A C F G#). The G# is not part of the F maj scale but Fmaj #9 is an extension of the F maj chord, which can produce an interesting dissonant tension. Try the folowing progression: F6, Fmaj, F min, E min7, C6, C (this is a progression from Don’t Get Around Much Anymore).

Can you save the state and upload it here as an example of the issue on your song, please?

I have just done a short piece using the first four chords from Blues 2 and recorded Basic Performance 1 in Reaper.

The midi output is 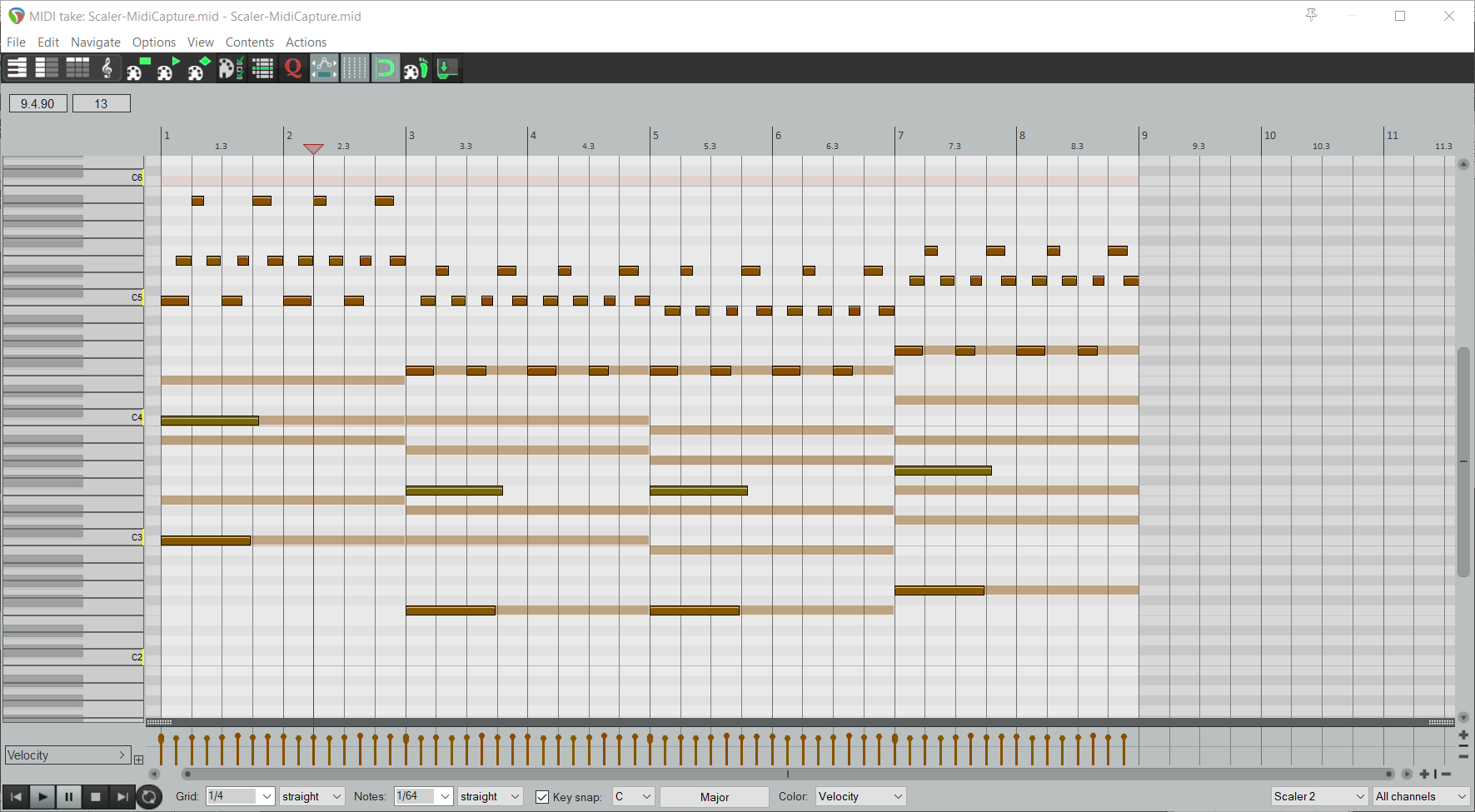 The light coloured notes are the chord notes from the pattern, and the dark ones a re the notes in the performance.