Scaler with BBC SO Discovery: the easiest workflow ever

, I also abandoned the (foolish) idea to orchestrate like Riccardo Muti 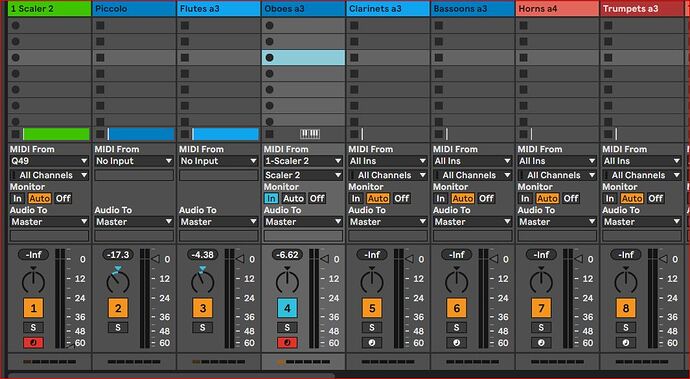 When you have recorded one instrument, set it to No input (you see 2 of them in this state) and go on with the next instrument, and so on up to the end, and you’ll listen the orchestral score forming in real-time at each step

N.B: you can use Scaler automatically to build takes, or you can use the Keys-Lock feature, and in my test I used both

To have the proper key-ranges instead, I just used the 3 Scaler voice groupings that worked nicely for the first 3 instruments, but in case they are not enough for the remaining instruments, one can always use any pitch tool

well, now that a Master in orchestration confirmed that my workflow is sound, I’ll be stuck on it and I’ll happily send MMO to the hell

"I like the system you propose. I used something similar for a while, but I used the Scaler outputs to a Midi track in Ableton, which, in turn, had a Loopmidi Midi channel.

I am currently using PluginGuru’s Unify to separate tracks and to take advantage of its elaborate patches. Also, from Opus I have been doing channel separation to be able to write what it sounds like.

However, your way of seeing things seems very opportune to me. Orchestration is a subject that higher-grade students from conservatories enter after about 10 years of other fundamental studies.

Sometimes we think (and we want to do) that everything works in a few minutes without having studied even those few minutes, hehe.

We want everything to sound right out of the box. And so it happens that our compositions are so ephemeral.

Even so, I think you have given a good guide so that, from a good idea, a good orchestration can emerge. Thanks for sharing, Claudio"

What’s MMO to the hell mean? The only meaning of MMO I know is Massive Multiplayer Online game.

MMO = Multi Midi Out (of order)

Scaler MMO and orchestral stuff: multi-timbral synths are better to me