I first met the KeySwitch idea with my keyboard. It soon became apparent that many of the keyboards available, especially for children, had this feature. Plus, most were not full-size keys, so far better for the smaller hands.

As a Primary Teacher, I started teaching children to play with keyboards and not the piano. My objective was to get them into playing and being creative. Many later went on to study music.

Playing chords with just the single fingers of their left hand was magic. Even though they always played on the white notes, they could play in any key and loved exploring the options available. Also, many of these keyboards could add to the single-fingered chord, adding a second key to produce 7th, 9th and sus etc. I’m pleased to say that many soon outshone my abilities and created some fantastic pieces.

I often used well know patterns to play with and develop their right hand. It usually started with just the five notes of the pentatonic scale. This meant that I would leave out the F and B notes, or as they knew them, numbers 4 and 7.

I always wished there was a way to remove keys 4 and 7, thereby leaving five notes to fit their hand.

I’ve tried to do this with Scaler, using Pentatonic Scales and the various Key-Lock options. Sometimes I could get close, but not quite there.

I was wondering if any of the development team have an idea of how to do this. Maybe another option in Key-Lock?

Computers and Midi Keyboards are ubiquitous in playing and creating music today. I think that this idea could be of benefit to players, song creators and Scaler too.

Some of the common patterns played together. 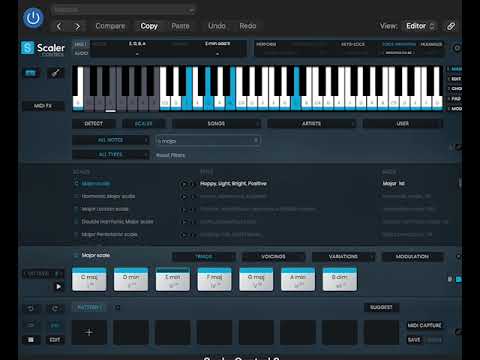 If you select a major pentatonic scale 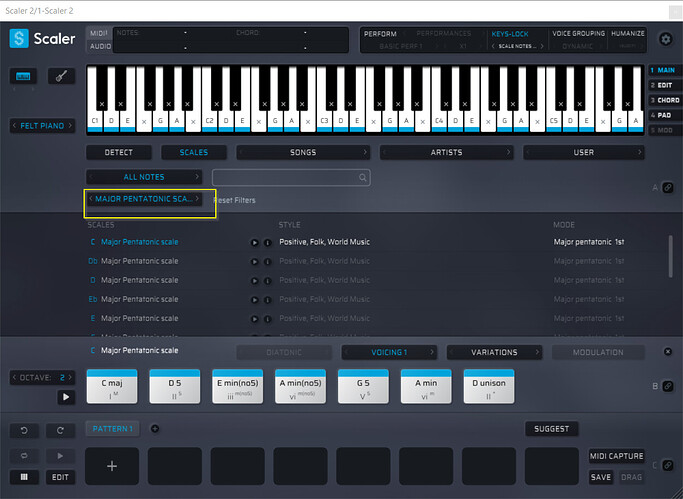 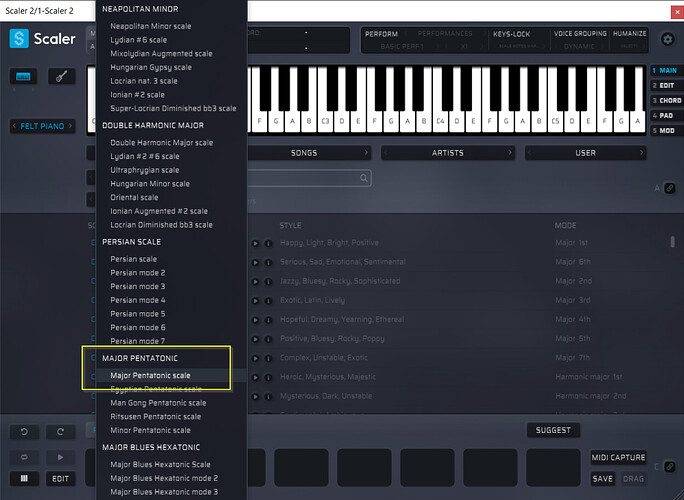 and set Keys Lock to “Scale Notes Only” 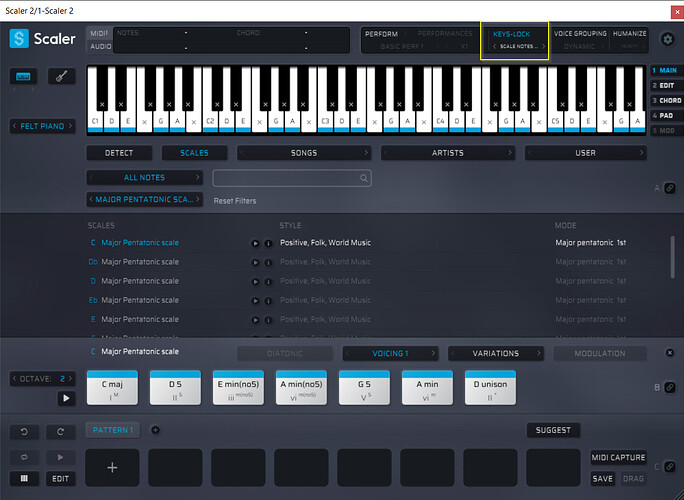 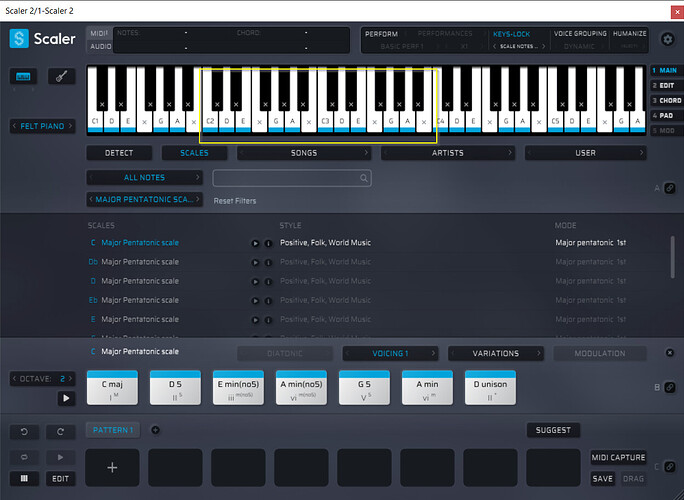 I think this will achieve your goal. You can only play the notes of the scale . The notes marked with x do not sound.

Hi Ed66 and thanks for the reply.

I did try using the Pentatonic Scales and as you say, with Scale Notes only, it does mute the F and B key. Same with Scale White notes.

I always wished there was a way to remove keys 4 and 7, thereby leaving five notes to fit their hand.

This is what I was trying to achieve but even with Pentatonic scale and Chord Notes in Key-Lock, it does play the same as I did video clip.

Many thanks again. Much appreciated!

My idea is to place the five notes directly under the thumb an fingers of the right hand. This would make if far easier for my younger players with smaller hands to be creative with melodies. I hope that make sense.

Here is a couple of images showing the keyboard without the 4th and 7th key.

Or maybe a variation of this?

There is no option for this in the current rlease of Scaler. I am not sure that this is such a good idea as it could get our fledgling musicians into bad habits as it would not encourage them to play the correct notes.

There are a lot of young children who successfully learn to play keyboards and I am sure that they don’t all have big hands.

I wonder if it is possible to get keyboards with smaller keys so that they still have the full set of 12 tones per octave, but physically closer together, but it is for discussion amongst experienced music teachers to suggest the best solution. Obviously we do not want to discourage children from playing music.

BTW I seem to remember hearing Reginald Kenneth Dwight (aka Sir Elton John) in an interview saying that the reason he doesn’t perform a lot of classical music is because his hands are too small! And he started playing at a very young age.

You are right; many children learn to play the piano classically and do so well.

I’ve seen many more children, keen to play music, turned off by the demand to learn music theory and continual repetitive practice. I’m not suggesting an alternate method of playing; just trying to find ways to capture that lost musician.

I’m only trying to develop the idea already built into Scaler. Here we can Bind Chords and play them with just one finger. If Scaler could also bind the notes for the right hand, it would aid playing. I think just as Binding Chords is a shortcut/aid to help so many, maybe various bindings of right-hand keys, such as the pentatonic notes, could also support many regardless of hand size and musical ability.

Children and adults will want to learn more if we can catch them and get them playing and being creative in the first place.

This is where products like Scaler help. Why have these products if learning in the same old way is best?

We all learn and benefit from different methods of teaching. One style does fit all.

These are only my thoughts and opinions and are no more valid than yours or anyone else.

Thanks for your comments

Actually, I think this is a great feature request. I would be something along the lines of the Smart Instruments in the IOS version of GarageBand where you can set the instrument to any number of scales in the given key. The piano keys become just a series of keys of relative pitches in the selected scale. Great for playing wild pentatonic organ and synth solos even when you don’t know what you’re doing!

The piano keys become just a series of keys of relative pitches in the selected scale.

Scaler does this with Key-Lock, so I would think it could be done.

The kids I taught thought the Pentatonic Keys were some kind of magic. Brilliant when you don’t know what you’re doing; just being creative by ear! Play any chord and any key. What’s not to like?